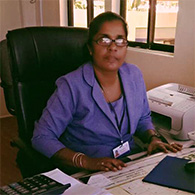 Shama hails from the ancient County of Berbice and is happily married for 24 years. She has a daughter who is presently pursuing her career in Medicine. Shama began her working career with brief one year stints at the Skeldon Hospital and the Corriverton Mayor & Town Council. She then worked as a legal clerk with an Attorney for another two years before commencing her insurance career in 1989 with Mr. Sukhpaul’s agency in Corriverton, Berbice.

In 1991, Shama officially joined GTM, when it started its own captive Branch Office in Corriverton, where she eventually rose to the rank of Branch Manager until her departure in July, 2011. During the latter half of 2011, Shama worked closely with Raj who pioneered the startup of the first insurance brokerage Firm in Berbice. In January 2012, she officially started out as the Branch Manager of RSI Brokers.

This Branch Office has continued to grow from strength to strength and on the 1st January, 2016 was changed to a Franchise. This is a tribute to the 25 years and more of committed service by Shama to her chosen career, industry and community.