February 22, 2014 By GxMedia With Comments are off for this post 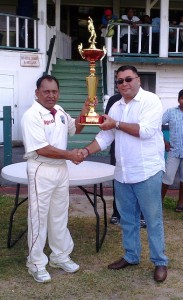 Upper East Coast Tigers roar to title honours
Upper East Coast Tigers eased to a seven-wicket victory over West Bank Demerara Mavericks to be crowned champions of the Demerara Cricket Board (DBC)/Raj Singh Insurance Brokers/Trophy Stall over-40, 20-over competition on Saturday at the Everest Cricket Club ground, Camp Road.
The men from West Demerara took first strike and succumbed for just 89 in 16.4 overs. Abid Hanif topscored with 18, while Deoram Persaud and Dion Williams chipped in with 15 and 13 respectively. Bowling for Upper East Coast Tigers, Desmond Butts grabbed 2-13, while six other bowlers accounted for one wicket apiece.
Tigers’ chase was led by opener and captain, Sheik Mohamed, who smashed the first over of the match for 20 runs. The former national wicketkeeper/batsman and former senior national selector was dismissed for 32 in the eighth over. After that, it was Mark Malone who saw the Tigers home with a solid 26. Malone’s performance got him the Man-of-the-Match award.
At the presentation ceremony which followed the game, Vice-president of the DCB, Anand Sanasie, congratulated both teams for playing competitive cricket throughout the tournament. He further lauded the DCB president, Raj Singh for bringing back Over-40 action and using his initiative to sponsor it.
Raj Singh said as the sponsor he is satisfied with the competition and congratulated both teams as well. He noted that from a Guyana Cricket Board (GCB) perspective, they are looking to have an Inter-County Over-40 competition some time in the future.